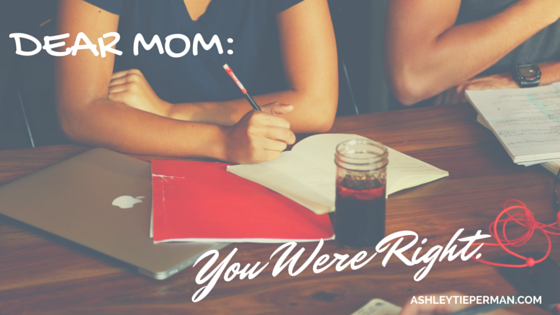 I know you’ve been waiting to hear these three little words for years. How do I know? Because I’ve seen it happen over the years, your face would light up every time Dad thought he knew what time to leave to beat the traffic and that you were wrong and he was right. Then, while stuck in grid-lock traffic, you would soak up all the cussing and honking and red brake lights, a little smirk creeping onto your face from the passenger seat.

Over the years, you tried to teach me not to procrastinate. You tried to sit down with me and help me schedule my time. I know that you know this, but I would sometimes agree to sit with you at the kitchen table to make a plan of how I would tackle it all. But I was barely listening. You would want me to prioritize and get a head start on reading the book and then writing the paper. But I was barely listening.

So I didn’t get that head start. And then the night before it was due, of course I had cheerleading practice until 9:30 at night (which you tried to tell me during the barely-listening session). So I closed my bedroom door and stayed up until 2 am trying to crank out a bogus paper on a book I barely read. You hated to see me suffer, so I know you stayed up in the room next to me, waiting for my light to turn off. You wrote me a note to skip first period for a “doctor’s appointment” and you handed it to me with those talking eyes.

And I wanted to be right.

When I was really little, it was more about our artistic differences. I wanted to wear a tutu over top of hot pink striped biker shorts to school. Your tastes were a little different. You thought the flower dress with the tights looked like the more sensible choice.

When I got older, it was more about our vocabulary differences. I wanted to say, “I hate you” and “This is a joke” and “Why should I care?”. Your vocabulary was a little different. You thought it was better to say, “I will always love you, but right now I don’t like you” and “I am sorry” and “You were right.” We must have learned different vocabulary words in school, and for this I am sorry.

And here’s the thing, the thing I’m trying to say: if I could take back all the times I talked back and basically spit in your face, I would. Dad told me sometimes when I would make you cry. My words pierced you so hard, so deep, that you would lock yourself in the bathroom for the world’s longest bubble bath and just cry. For this, I am so very sorry.

You warned me that one day my little brother would grow up, bigger and stronger than I was. You warned me that all those years of me picking on him—pinching him, hitting him, showing him who was boss—would catch up to me. Then That Big Day came. Suddenly, he was taller and stronger and his voice was deeper. He tried to attack me after years of pent-up frustration. You broke us apart and then you didn’t have to say much. Your silence said it all.

But, better than just a mother—more like a sister or a best friend who tries to steal my clothes—you’ve picked me up after all the moments when you could have rubbed it in my face. You’ve wiped my tears and held me close.

You’ve suffered your own heartbreak as you’ve waited for your little brat to grow up and learn those three little words.

So hear them today. Let them soak in. You deserve them.

8 thoughts on “Dear Mom: You Were Right”