My professor warned us, “Ladies, do not start reading this book at night.” Day turned to night—twice—and I found myself alone in the dark reading The Spirit of the Rainforest, wishing I had followed his advice.

Mark Ritchie tells the story through the eyes of Jungleman, a village leader of the Yanomamo people of the Amazon jungles. Told with graphic detail, often using violent images, this story takes you into the lives of the Yanomamo who blow powdered green ebene (a hallucinogenic) into their noses to talk to their spirits. Jungleman’s spirits would tell him who had caused a death in his village and his village would attack the other village, bursting into a killing frenzy where they would rape women repeatedly and kill children by throwing them on spears.

This is only the beginning. Page after page, you think that it can’t get any worse, and the horrific images sink deeper into darkness. I was captivated by the story, wanting to follow who was next to throw away their spirits and follow the “great spirit” that the missionaries came to tell them about. The great spirit who loved them and wanted a better life for them.

But every few pages, I had to remind myself that this is not a work of fiction unraveling a captivating plot. These are real people. Real stories. Real lives. Real women in hammocks.

We have a hammock at our lake house that has come to represent a place of peace and solitude. We read in the hammock, nap in the hammock, gaze into a lull of the crashing waves on the shoreline.

For the Yanomamo women, hammocks were where the men would grab them in the middle of the night. They were kicking and screaming, but the women couldn’t stop the men from beating them and raping them. As soon as the women reached maturity, they become property of these men, stolen and used again and again. They would wait in their hammocks for the next moment of abuse—a rite of passage that their mothers told them they would get used to.

You can probably see why I wanted this book to be over and this assignment to be complete as quickly as possible. In our world of distractions, it is so easy to turn away and ignore the reality of those in distant worlds. It’s also incredibly easy to read this as a “tale of the jungle” and fail to see the harsh similarities of brutality in our own “civilized” world. I know there are women here who don’t sway in peaceful hammocks.

In a recent NY Times Magazine essay about the images we have all seen of the Syrian boy who drowned trying to escape with his family, the author said that for him, it was the shoes. The shoes of the little boy instantly reminded him of his own little boy’s shoes and suddenly the picture wasn’t just a little boy in a faraway land, but an image with terribly familiar details.

“There are many things separating your life from theirs, of course. But from another angle…all that really separates you are a few strokes of misfortune.” 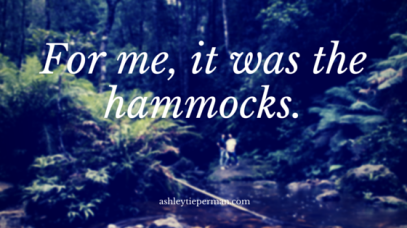 What hammocks are we swaying in, closing our eyes to drown out the world? The next time I complain about the mosquitoes biting me in the hammock or the sun being too hot on my face, I want to remember the Yanomamo women who would give anything to sway in my hammock.

3 thoughts on “The Women in the Hammocks.”

I am definitely not the same person from this picture. @hostetler.nancy did this fun photo shoot a few months before I took the leap in 2018 to work as a full-time freelance writer. At the time, I was still working at a 9 to 5 desk job, quietly preparing to turn in my resignation. There was no way to know what was coming. (Can we ever really know?) My goals and priorities have shifted from that first year, and I’m slowly learning to accept that as a healthy sign of growth. 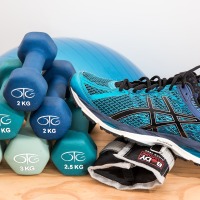